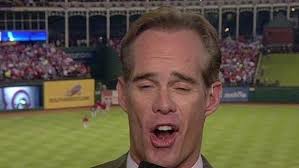 Not Coming To a Golf Tournament Near You

Late Sunday night the Associated Press reported that Fox was walking away from it’s 12 year USGA rights deal starting this year, with NBC/Golf Channel picking up the rights.  For viewers, this means that the US Open (which Fox was already advertising for this year’s event that was moved to September) will be on NBC.  It’s not clear who will pick up early-round coverage for Thursday and Fridays; Golf Channel would make a ton of sense, but they also have NBCSN as a viable alternative.

The USGA’s press release spells out the details.  Sort of.  Doesn’t really indicate how many hours will be on Golf Channel or NBC, but we digress.

I’ve been critical of Fox for a host of reasons.  I’m old enough to remember when they won US free-to-air rights for the NHL back in the mid 1990’s and gave viewers…glow pucks and animated characters.  I kid you not.  Who thought any of this made sense?

You “could” make the argument that the Fox Glowing Puck was a precursor to the ProTracer/Top-Tracer technology that should be as common as watching in HD.  I won’t.  Because the puck is black, and it’s on a white ice surface.  Not hard to follow if you have eyes.  Just watch where the players go.  Easy.

I was very critical of their 2015 and 2016 US Open coverage and deservedly so because it was terrible.  I don’t blame Fox as much as I do the USGA, who (based on multiple articles) seemed to want to go to Fox when the previous rights deal expired in 2014.  The USGA wanted this.  They wanted a broadcaster who had never covered the sport to cover the country’s national championship as their first broadcast.  It wasn’t as if Fox was covering the PGA Tour (or even a pro tour of some kind).

They brought in Joe Buck, who had never called golf before and never really improved (as I’ve said, if were doing 8-10 tournaments a year covering the PGA and/or LPGA Tour maybe it works better, but when he sees these players one week a year it’s always going to be problematic).  Greg Norman was their first analyst (smart, knows the game but couldn’t translate that into being that 18th hole analyst).  They flooded the air with people who had never worked together before on one of the two biggest viewing tournaments of the year.  They were unwilling to cover the controversy over Dustin Johnson’s ball moving in 2016 despite pros going after the USGA on social media(and were unwilling to call out the USGA’s incompetence in course setup in 2015, 2016 and 2018).  These are all self-inflicted wounds.

Sidebar: Joe Buck did several cameos on the IFC show “Brockmire” and he was outstanding and came off as a guy you’d totally want to hang out with.  If he brought that persona to his baseball and football coverage it would help a ton.  He was funny and he was able to throw a few good barbs out there.  If you’re looking for a show to binge-watch you could do worse.  Hank Azaria is hilarious.

Not to beat a dead horse, but Oakmont 2016 and Shinnecock 2018 should have been easy, but the USGA’s motto of “hold my beer while we fix that problem that didn’t exist” came into play.

Having said that, they did bring about some real change on the production side:

“If” I were NBC, here’s some things I’d do that would demonstrate a real understanding of how to take the good things that Fox did, and improve upon them.  Time to teach an old dog some new tricks.

The only potential issue that I can see (from 2021 onward) is their Stanley Cup Final coverage running into the golf (especially for any west coast events, like in 2021 and 2023) which means that the Saturday/Sunday are going to be tricky options (even if you go to an afternoon start you have overtime as a potential issue).  Especially next year (2021 at Torrey Pines) if the NHL starts late and runs past the early June finish that they’ve had in 2018 and 2019 (finishing before June 10th) and/or if the NHL adds teams to their playoffs.

Coming Soon to Peacock (hopefully not)!

Overall I think this is a good move but we won’t know until September when it’s US Open time.