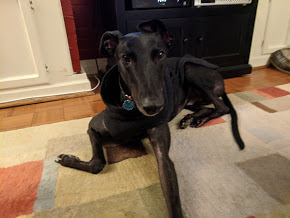 Say hi to Bear, the newest member of the team here at Single Golfer in Cart. Bear is currently an administrative trainee and living room rug supporter.

Note from your faithful scribe: you may or may not have noticed that I haven’t been writing much.  I started a new job in early January and it’s kept me busy (which is a nice situation to have; I’m happy so far and if we ever get some decent weather I hope to get my butt back on the course where it belongs).  I’ll still write but the frequency of posts may not be as much as you may have come to expect.  I’ll be happy to refund your money.  No, seriously. 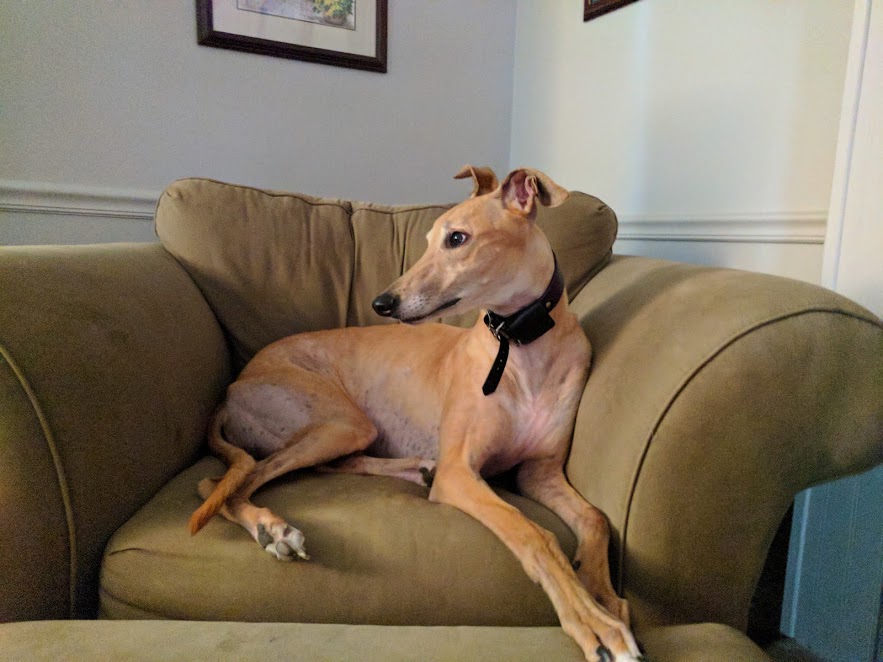 Kona was more than a dog. He kept me going during some pretty dark days in 2018.

Additionally, back in December I had to say goodbye to Kona, who appeared here (and in the above photo that was not staged-I found him this way).  Devastated would be a fairly accurate way to describe my mood at the time.  Kona was that rare dog who got along with anyone and everyone.  We brought him home in 2011 and he pretty much had the place down pat within 30 minutes.  As we learned, in early December he had a series of several strokes that effectively left him unable to stand, walk or function.  My only regret is that he went so quickly that we couldn’t have Kona’s Best Day Ever (he deserved it for sure).

Since we last spoke, things have been happening.  The new rules of golf went into effect in January and so far, calling it a goat rodeo might be the nicest thing written about it.  Look, I’m not one to be critical but every week has been a fiasco to one degree or another.  Slow play is still a problem, nobody seems to have clue one about where to drop a ball, backstopping is still happening, you have touring professionals purposely damaging a course and CBS/NBC/Golf Channel can’t seem to provide decent TV coverage.  Other than that, it’s going great.

That’s why I’m here, to help spruce up the place a bit.  I’m going to make a few slight changes for the betterment of everyone involved.  You can trust me; this won’t hurt much.

Ball drop: Stand and let your arms hang naturally.  That’s where you drop the ball from.  Simple enough?  Take more than 20 seconds to drop a ball and it’s a stroke penalty.  Drop the damn thing and make your play.  Let’s go!  While we still have daylight!

Rules: Players and their caddies will be required to attend a rules seminar conducted by Tour rules officials prior to being able to play in an event (officials will hold seminars during every fall series and West Coast event as will Web.com events for the first two months of their season).  Failure to attend renders the player ineligible to play in events.  Players who are new to the Tour must attend said seminar and pass a test on the rules as a condition of receiving their Tour card.  You’re busy?  Good.  You’re ineligible to participate in any event until you attend the seminar.

Pace of play: Borrowing from Peter Kessler (at some point I’m going to have to apologize for the snarky comments about the Perfect Club Infomercial, but not now), you get 60 seconds to hit a shot.  You get one warning, then it’s two strokes, then another two strokes, then a DQ (Kessler’s version goes right to a 2-stroke penalty; I’m giving you ONE warning).  I’m going to add some soccer-style accumulation penalties; after 5 bad times, you’re suspended for 30 days (No  tournaments, majors, nothing- oh, you were qualified for a major?  Too bad.  Should have thought of that before).  After 8 bad times, it’s 60 days.  After 10, it’s six months and ineligibility for FedEx Cup points/bonuses.  Oh, and going over two minutes doubles the penalty.  Looking at you, slowpokes.

Ball: Tournaments now have the option of stipulating a tournament ball for all competitors as a local rule, condition of competition.  Kessler wants the original ProV1 series, which is a good idea.  I like this, and will grant tournaments to mandate the use of a tournament ball as they see fit.  Pro tennis players can’t use their own brand of balls when they serve (each tournament committee decides this).  Just saying.

USGA: Peter Kessler is picking up what I’ve been putting down for years.  You’re done, USGA.  The door is to the right.  Don’t let it hit you on the way out.  Going forward, the local superintendent will now set up the course for USGA events.  I trust someone who knows every inch of that course over some part-time wannabe operating under the fantasy that par must be protected against the forces of evil.  Grow the rough up enough to produce the odd flier lie (and more importantly, make the players actually have to think).  The rough ‘should’ be a penalty of some kind.  Don’t turn the greens into cement.  I wouldn’t let Mike Davis within a mile of a golf course.  He’s done more damage to golf courses than vandals.

Backstopping: Any shot played from inside 30 yards that strikes a ball that hasn’t been marked will be two strokes for BOTH players.  Start carrying a ball marker coin or a couple dimes.

TV: It’s 2019.  How is it that the paste-eating stepchild of golf coverage (FOX) is the only network that manages a leader board on the screen at all times?  I guess I can see not having one on early round coverage, but on weekend coverage?  GET A DAMN LEADER-BOARD.  It won’t clutter things up.   You’ll inform the viewer, which seems like something you might want to do.  Oh, and Pro Tracer should be a requirement on par with HD broadcasts.   It’s 2019.  Multiple sports have mobile cameras that referees are wearing DURING PLAY.

FINES/SUSPENSIONS: Effective immediately, all fines and suspensions are to be announced publicly.  The NHL puts out videos reviewing what happens to cause a player to be suspended for an on-ice incident.  You’re telling me the PGA Tour can’t follow suit?  Show the video!  Or at least put something out along the lines of “During the third round of the Viagra Invitational Presented by Barca-lounger, Chandler Miller swore audibly after hitting his fifth shot on the 8th hole into a water hazard.  He then broke two clubs and threw them at his caddie.  The Player Disciplinary Tribunal has reviewed the footage, and assessed Mr. Miller a $45,000 fine and suspended him for next week’s Spirit Airlines Shootout Presented By Carling Black Label.”

You’re welcome, everyone.  Now let’s pray for some spring weather.

The First Annual SGIC Airing of the Grievances