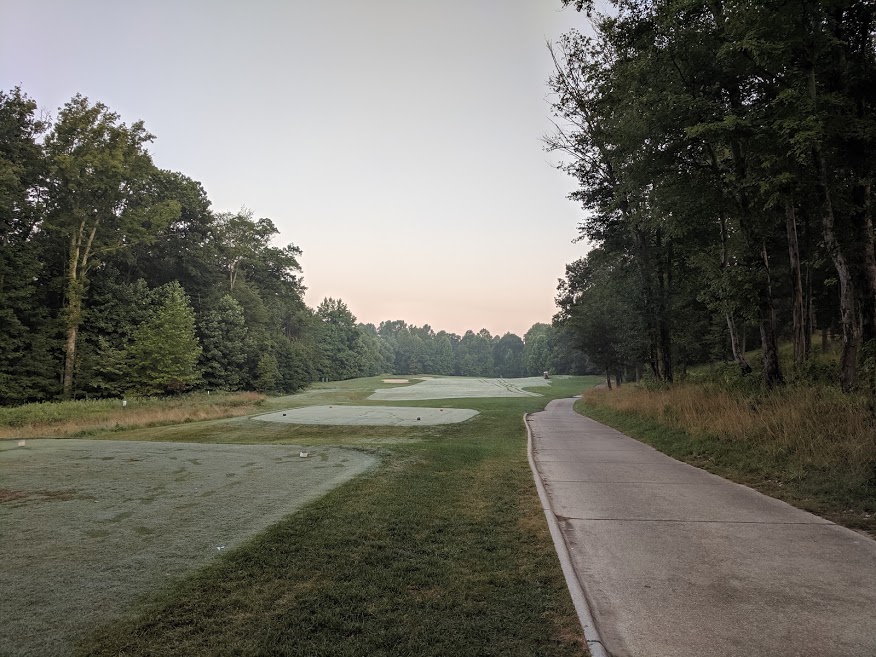 As I head into the Senior Tour age group, I played one final round as a 40-something on Saturday at Oak Creek in Upper Marlboro.  I hadn’t been there before and have heard some promising things.  Overall, it’s an interesting layout that is definitely NOT walkable under any circumstances.  The course is built into a gated housing development (they’re pretty serious about it; the course is considered to be semi-private which I took to mean that residents had some kind of privileges which makes sense), and the distances between the 1st and 2nd holes combined with the 9th and 10th holes are exhaustive  (and involve crossing a busy street).  It’s pretty tree-lined on most holes so being accurate off the tee is important.  The vast majority of holes are straightforward.  A few dogleg holes here and there but nothing particularly crazy. 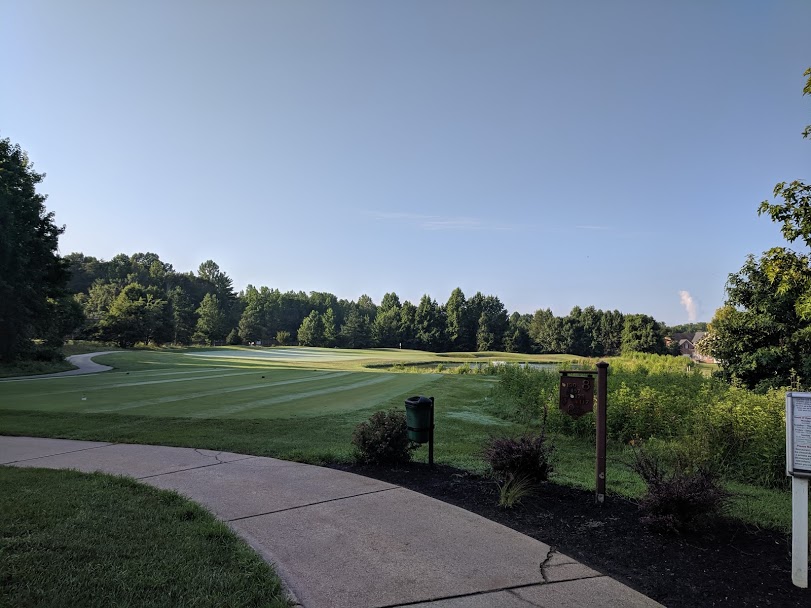 4th hole at Oak Creek, waiting for the first group. Like putting JB Holmes and Patrick Cantlay out first. You drive through the barn on the right, and if you’re Brian Burke, you can have a barn fight!

13th hole from the tee box. Visually intimidating but some bail-out areas abound.

Overall it’s not bad.  If you’re playing on a weekend note that it’s near Six Flags America so take that into account for driving.  The exit that they tell you to take on the Beltway is closed (15A); I took 15B and made liberal use of my u-turn skills.  It’s also easy to get to off of 301.  If you have a tee time on a Sunday when the Redskins have a home game (the stadium is 1-2 exits away) be warned.  In the end, I had fun.  It’s a 45-60 minute hike for me so I may not be in a massive rush to play it again, but unfortunately this seems to becoming the new normal for golf.

So having been curious since they opened, I went to the new 2nd Swing in Columbia this afternoon not knowing what to expect.  I was…impressed.

When the pushcart mafia rolls up on you they mean business.

Near a long row of hitting bays and an aisle of clubs. Not pictured- they have a few stations with Trackman.

I walked out with two new hats (my preferred brand/style) and a new towel (my preferred brand) for far less than I’d pay otherwise.  It’s a fantastic addition to the area and a welcome option (I love Golf Galaxy but getting over there on a weekend while fighting Costco traffic is at best difficult).

Play well, stay cool, and here’s to plenty of pars, birdies and eagles.