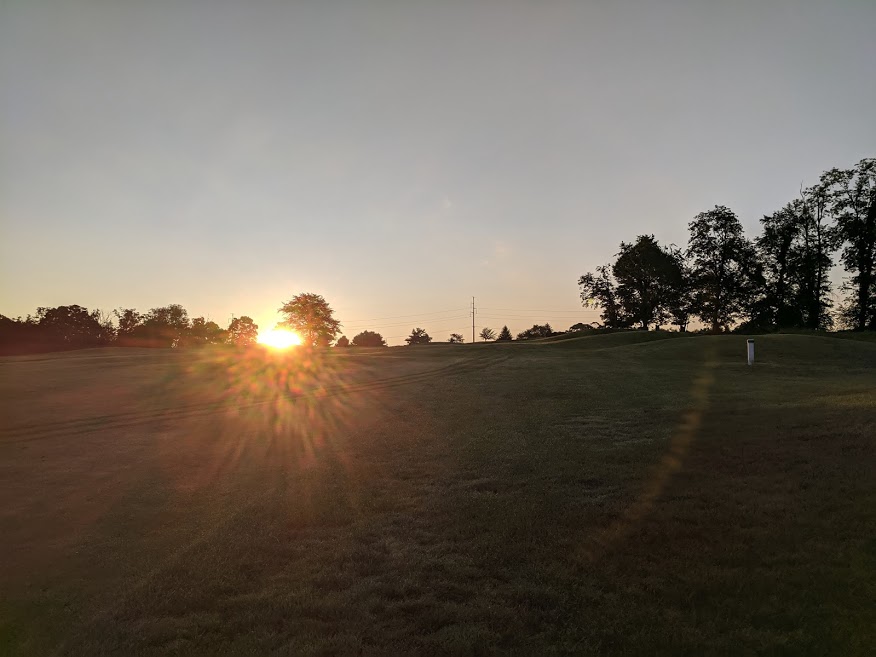 Sunrise at Rattlewood from the 3rd hole. It’s moments like this that make getting up at 4am worth it.

I know it’s been forever since my last blog, but work has kept me very busy (which I’ll happily take over the alternative) as I feel like I’m having to learn things I should have learned a long time ago but was too busy working to actually learn this foundation-level knowledge.  In a lot of ways, I stumbled into my profession because an opportunity came available and I took it.  It’s not like I have a degree in this field.

Anyway, April was a bit of a blur.  The dog we adopted back in February attacked and bit one of our friends (doing considerable damage) so we surrendered the dog to the group we adopted it from.  Last we heard the dog was working with a trainer on his behavioral issues.  Suffice to say, it was a bad time all around.  Greyhounds aren’t known for aggressive behavior so it came as a real shock.

Plus, I started having pain issues.  In the back of my mind, decades of playing collision sports were eventually going to catch up with me and they have.  After two months of tests, x-rays, therapy and appointments I found out I have arthritis in my left knee, which is where all of the force goes on my downswing.  So now it’s about managing it.  On the bright side, the years of heavy drinking, smoking, dalliances with controlled substances and other stupid decisions I’m none the worse for wear, but it was definitely a scared-straight moment.

May was equally hectic.  She Who Is Really in Charge and I celebrated 16 years together and there was all kinds of other goings-on…all of which meant no golf.  On June 1st we brought home a new greyhound (after much debate we kept his foster name of Linus).   Linus is the kind of lovable goofball that we were hoping for.  Super sweet, loves people, and is seemingly always happy. 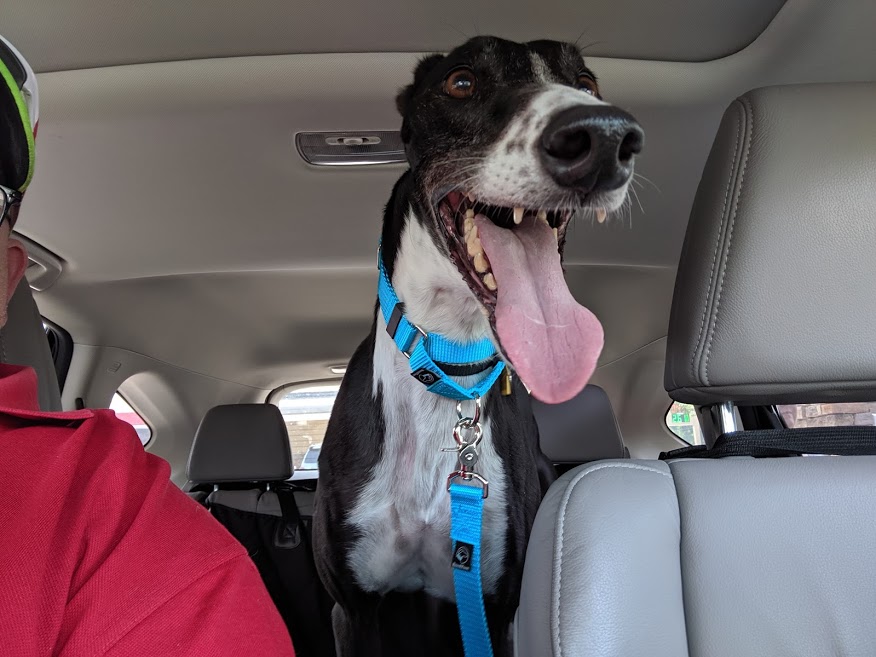 Linus coming home with us. My shoulder is on the left side of the photo. He wanted to sit in the front seat the entire drive back (2 hours).

So it wasn’t until early June that I finally got back on the horse, as it were.  Some short recaps:

Played Sunday the 9th at Compass Pointe on the South/West routing.  The course is in significantly better shape than it was in early 2017.  The bermuda tees and fairways look great and the greens were in good shape as well.  I’ll be honest- I thought this course was on its last legs 2 years ago but it’s pulled a 180.

1st hole, South/West Course. In the fairway off the tee.

Played Fathers Day at Hampshire Greens.  Got paired up with some kid in his 20’s who didn’t say five words, spent the entire round on his phone, walked on my line on three occasions and didn’t understand how shadows work.  Course was in decent shape.  Pace of play was abysmal due to our 20-something and his Kevin Na-Patrick Cantlay swing routine.  Is there a nice way to say “HIT THE FUCKING THING”?  Reminder that playing on Fathers Day is, at best, a lottery for all the wrong reasons.

Played at UMD Golf Course on 7/6.  Please let this course be around in ten years.  Course was in pretty good shape with one or two minor exceptions.   Can’t say enough about the staff friendliness.  Had a great time; hope to return.

UMD golf course at sunrise. 1st hole. This will do quite nicely.

Played 7/13 at Rattlewood.  As always, I had a great time.  It’s a fun course that has enough challenge to keep you awake but isn’t an absolute brute.  It’ll (pardon the pun) bite you but at 6,500 yards from the tips you don’t have to crush it off the tee and for the most part, the fairways are pretty generous.

Looking forward (as always) to the Open Championship.  It remains (in my opinion) the best of the four.  They don’t overthink course setup, they don’t try to protect par, and you know going in that weather is going to be a factor.  Hopefully Portrush will provide a worthy test.